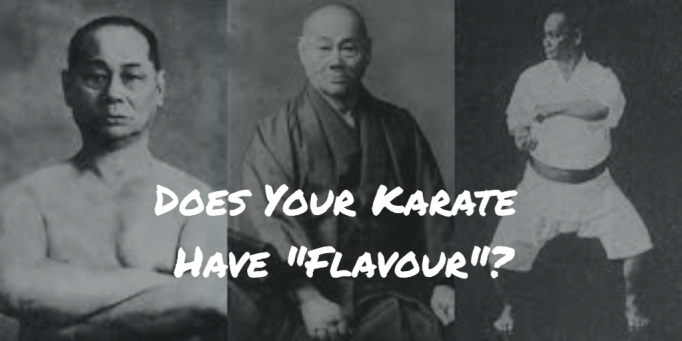 “It is necessary to drink alcohol and pursue other fun activities. The art [karate] of someone who is too serious has no flavour.” – Motobu Choki

I have a karate friend, sharing the sentiments of Motobu, who said, “if you can’t do a kata drunk, you can’t do it at all!”

I know of many BJJ practitioners who choose to smoke weed before training. Even while attending BJJ tournaments here in Canada, where marijuana is legal, I’ve seen dozens of practitioners smoke a joint before their matches. In the hopes to, as Eddie Bravo as said, “rely more on your instincts,” and let “your body take over. . . you don’t think about it, you just do it.”

Although I’ve never been high while training, I have taken CBD before practice and can speak to its benefits. I was far more relaxed both mentally and physically. When hitting mitts, I didn’t get gassed out as quickly, and my technique was far more on point. While grappling, I didn’t feel as anxious while being smothered in bottom positions, which allowed me to see more openings for escapes and various submissions. I also cared less about making mistakes; I took more risks that I might otherwise be afraid to take. Because of this, I found the experience generally more enjoyable. I embraced the experience of training.

One doesn’t need to do drugs or alcohol to gain these benefits. Simply, one can embrace child-like playfulness. Hence, so many speak of the importance of the beginner’s mind, shoshin, a concept from Zen Buddhism, for which I find many advocate but rarely actually practice.

I’m not necessarily trying to support alcohol or drug use in training, but there’s something to be said about the quality of someone’s practice and their relaxed nature towards their martial arts.

Rigidity does not breed creativity.

In the video below, Firas Zahabi speaks to the importance of this.

He uses Muay Thai and Russian wrestlers as an example. The Russians don’t go full out every practice; they have a type of focused play. Because they’re not too serious when practicing, their training is more explorative and allows for more consistent, quality reps.

Regarding Muay Thai practitioners, who have also been known to smoke and drink before their matches, Firas speaks about when they train with someone too serious or aggressive; they’ll view the individual as “too amateur.”

In an episode of the Ultimate Fighter, George St. Pierre introduced a French Muay Thai fighter who would get drunk before training and referred to him as a “free-thinker.”

GSP has also been known to have a glass of wine during his training camps. One of my favourite pass times on a sunny weekend afternoon is to enjoy a glass of wine while going through kata, or practicing weaponry. Not unlike having a beer at the golf course, it makes the practice more enjoyable and makes it an act of unwinding.

The underlying principle of using alcohol or drugs to facilitate practice, I think, is to allow for a flow state, which, as Firas Zahabi points out, is key to consistent and enjoyable training. So when Motobu speaks of flavour, perhaps he means that someone who is too serious has no flow, which I think most can agree, is essential for creativity and functional spontaneity.

Regardless of whether you choose to use alcohol or drugs or reap the benefits of integrating it into training, practicing martial arts should always be fun. Instructors who take themselves and their art too seriously tend to be less than enjoyable to train with, can be insufferably traditional and a complete bore. Do you think Motobu’s quote was directed at Funakoshi?

Martial arts like a fine wine, you don’t drink it with the purpose of finishing the glass, but to enjoy every sip. If you’re not enjoying the journey, why continue on the path?

Enjoyed this blog? Check out Karate and The Sunk Cost Fallacy!

A muse is a force personified as a woman, who is the source of inspiration for artists, or in this case a martial artist. The purpose of this endeavor is for me to share my own insight, creativity, and passion with other martial artists to bring out the best in our practices. I am a Sandan in Koryu Uchinadi under Hanshi Patrick McCarthy (9th dan).