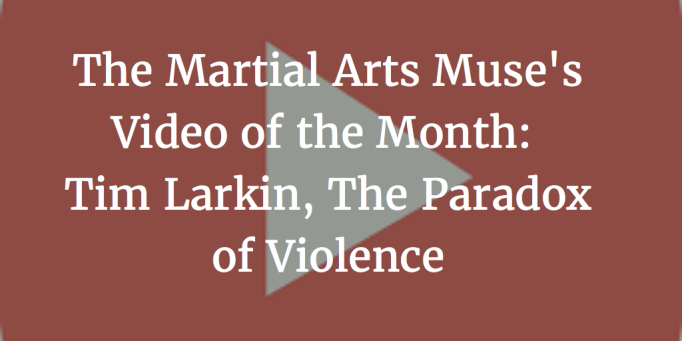 “Violence is rarely the answer, but when it is. . . it is the only answer.”

This TED Talk by Tim Larkin explores a topic that, as martial artists, we are very familiar with: violence.

Tim Larkin is a former military officer and aided in redesigning how special operations personnel prepared for close combat. In his 25-year career, Tim has trained people in 52 countries and has over 10,000 clients that have trained in his Target Focus Training (TFT), including celebrities, special law enforcement and military special operations units.

In his presentation, he talks about the “tool of violence.” Despite the fact that as a society we have stigmatized the tool of violence, associating it with the criminal element, it is a tool that is accessible to all of us. How the tool is used can either be determined as just or criminal depending on our intent and the context.

Tim points out that “when it comes to the tool of violence, the best information comes from the worst people in society,” most of which “reside in our prison system.” Those in the prison system use violence very specifically to maintain power and they are extremely efficient at it. “They are the best at being able to kill with their bare hands or with a tool,” but the majority of these individuals have absolutely no martial arts or combat sports training.

Then, what makes them so good at violence?

While looking at the UFC, Tim points out it has 31 rules and 27 of them prohibit injury. When a competitor is injured in the UFC, the event stops immediately and the athlete receives the treatment they need. “Injury has no place in competition.”

Most of us, however, will almost always view ourselves from the victim’s position. Yet, as Tim says we all have the ability to be good at using the tool of violence. Since the dawn of human existence, we’ve needed it to survive and have learned that by causing serious injury we can “bypass bigger, stronger and faster individuals.”

But, to be able to act upon this, we must shift our thinking because when violence is the answer, it is the only answer.

Watch Tim Larkin’s talk in full in the video below.

My name is Jen. 🙂 I started me martial arts journey at 11 years old when my brother said I should join the middle school wrestling team. The wrestling program was cancelled the following year, but eager to continue in the fighting arts, I started karate in 2001 and later returned to the squared circle as a competitor from 2002 to 2007. Since then, I’ve acquired my 1st dan in Shoto Kan/Chito Ryu Karate, 3rd dan in Koryu Uchinadi Kenpo Jutsu, purple belt in Krav Maga, blue belt in Brazilian Jiu-Jitsu, have assisted in coaching national champions in wrestling, and have gained considerable experience in weaponry. 🥋 With 21 years in the martial arts, I look forward to sharing my knowledge and experience to benefit others. 🤜🤛

Join 35 other subscribers
Follow The Martial Arts Muse on WordPress.com